Autumn can be smelled in the air now, and the autumn equinox is only three weeks away. Time to announce our end of year publications.

We’ll be releasing a new fiction title in September – ‘The Company of Birds’ by Nerine Dorman. Reflecting the author’s fascination with birds, and owls in particular, this is a literary fantasy, with intriguing characters and a touch of grimdark in the plot. A beautifully rendered alternate world, where fire magic is outlawed, and political factions vie for power. 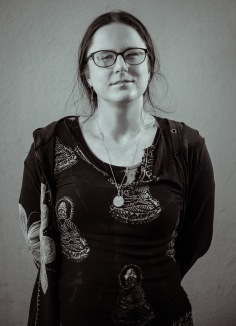 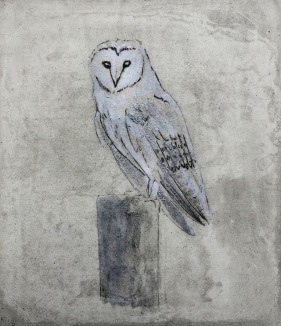 “Sometimes a hero must burn all she holds dear.

Unrest brews in the city-state of Uitenbach, but its magi continue their work, even though the world outside the hallowed grounds of their academy seems to be tearing itself to pieces.

Newly divorced and still smarting from her philandering ex-husband’s rejection, Maga Liese ten Haven doesn’t want to draw attention to herself. When the mysterious Atroyan tribesman Malagai reveals to Liese that she is the heir to a forbidden magical legacy, she is thrust into a conspiracy that may foment a civil war. If she fails, her magic will consume her.

But what if the only way to right the wrongs her people have done to the Atroyan nation is to sacrifice everything?”

This month we’ll publish the next in our series of Tanith Lee rare story collections ‘A Wolf at the Door’. 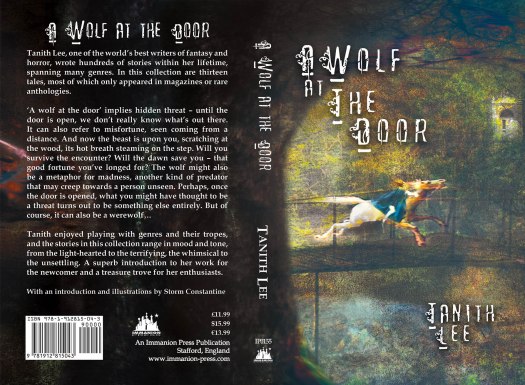 Tanith Lee, one of the world’s best writers of fantasy and horror, wrote hundreds of stories within her lifetime, spanning many genres. In this collection are thirteen tales, most of which only appeared in magazines or rare anthologies.

‘A wolf at the door’ implies hidden threat – until the door is open, we don’t really know what’s out there. It can also refer to misfortune, seen coming from a distance. And now the beast is upon you, scratching at the wood, its hot breath steaming on the step. Will you survive the encounter? Will the dawn save you – that good fortune you’ve longed for? The wolf might also be a metaphor for madness, another kind of predator that may creep towards a person unseen. Perhaps, once the door is opened, what you might have thought to be a threat turns out to be something else entirely. But of course, it can also be a werewolf…

Tanith enjoyed playing with genres and their tropes, and the stories in this collection range in mood and tone, from the light-hearted to the terrifying, the whimsical to the unsettling. A superb introduction to her work for the newcomer and a treasure trove for her enthusiasts.

With an introduction and illustrations by Storm Constantine and cover art by John Kaiine. Cover design by Danielle Lainton.

Contents: Huzdra, A Wolf at the Door, Venus Rising on Water, The Puma’s Daughter, The Return of Berenice, Sea Warg, Table Manners, The Werewolf, The Janfia Tree, Tiger I, Pinewood, Nightshade, Why Light? 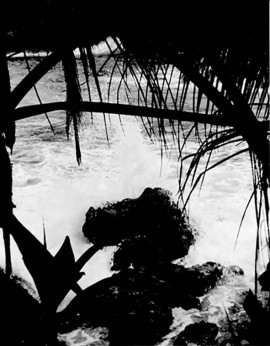 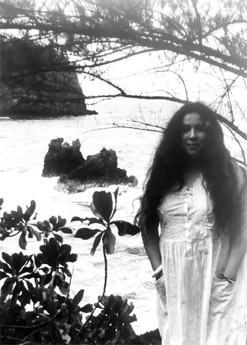 Also in October, Cornelia Benavidez’s next title ‘Petition for a Tomorrow: A Journey for Victor’ will be published. This follows on from her works ‘Victor H. Anderson: An American Shaman’, which explored the teachings and history of the creator of the Feri tradition, and ‘Transpiration’, a book of Cornelia’s poems that also included stories of her childhood and her discovery of alternative spirituality in 1970s San Francisco.

‘Petition for a Tomorrow’ tells the tale of Cornelia’s quest, as a young woman in 1986, to discover the spirits of Hawaii, which her mentor Victor intimated were a vital part of her spiritual growth. She and the friend who accompanied her to the mystical Islands had many adventures as they travelled around the sacred sites – a few of which were quite hair-raising! But Cornelia’s purpose was always to seek out the ancient gods of the Islands and ask for their help in preserving our world. The journey was filled with lessons and symbols, ending in a transforming experience at the mouth of a volcano.

A fascinating read, and a snapshot of an era, ‘Petition for a Tomorrow’ captures the spirit of emerging paganism in the world. Cover art by Peter Hollinghurst. (Cover art to be revealed soon.)

Storm Constantine’s new novel will be released this month. ‘Breathe, my Shadow’ is a stand-alone Wraeththu mythos story set in the Almagabran town of Ferelithia. Wraeththu enthusiasts will know this place as a significant site in the history of Pellaz, who became Tigron of the Gelaming tribe. But that was decades ago. Now, it is the archetypal party destination, thronged with hedonistic tourists, vibrant with events and concerts. It seems nothing can touch its carefree atmosphere of celebration and indulgence. Even its local dehar, Kelosanya, is named for the madness of erotic desire. But Ferelithia wasn’t always a place of light and fun. It was built on blood sacrifice and the darkest of magics. Very few Ferelithians know exactly how their tribe wrested the town from the surviving humans in the area, and those who do know must keep the details secret. But the truth has a habit of rising from where it was buried.

The arrival in Ferelithia of a very strange har, who has a dark history of his own, sets events in motion. The Pale Ones begin to walk, and the mysterious Pard Witch begins to haunt the town and its inhabitants. His influence stretches far, touching the lives of four hara who were once in a Ferelithian band together. In far off Megalithica a rich and successful musician named Amorel is subjected to horrifying hallucinations. In Alba Sulh, the drummer Pharis finds his community threatened by a nebulous enemy that can only derive from his own past. Rue, Tigrina of Immanion, once a singer in the band, has unsettling encounters with a har who looks like somehar he knew a long time ago – and believed dead. Karn, the erstwhile guitarist, is now High Municiphar of Ferelithia – and he, of all of them, has the most secrets to control and contain. But until somehar can say for sure the threats derive from the past or from an unexpected current influence, they can’t protect themselves or their town. Whatever the consequences, a very dark history has to be faced.

The novel began life as a story in the ‘Para Spectral’ anthology, but Storm has taken it off in several different directions, with an additional cast of characters both old and new. She says:

‘When I wrote the (not so) short story, there was so much more I wanted to tell. I felt it simply finished at the end of a chapter rather than concluded the plot. This can often happen with my stories, and most often the urge to go further with them withers after a few weeks and I’m happy to leave them as they are. However, this one refused to lie down and do as it was told. Ferelithia fascinates me. It’s like the Ibiza of the Wraeththu world, but as with that island of hedonistic pleasure in our real world, Ferelithia has a mottled past, stretching back through history to the days of the ancient gods. (The captivating new documentary by Julien Temple about Ibiza’s history and culture was timely and inspirational, as I was able to watch it during the latter stages of writing the book.) ‘Breathe, my Shadow’ makes the characters face who and what they were. The past left them broken, and while some have recovered and made new lives for themselves others have not. So it isn’t simply a mystery, but a tale about atonement, recovery, forgiveness and acceptance. It is, however, still a ghost story.’

Cover art by Ruby. No cover yet, but here’s one of characters from the novel taken from the cover of Para Spectral. 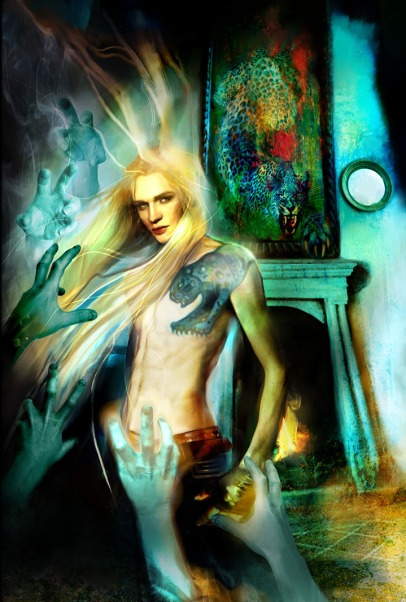 We’ll also be releasing Bill Duvendack’s next book in December. ‘Psychic Protection’ follows on from his popular titles, ‘Vocal Magick’ and ‘Spirit Relations’. 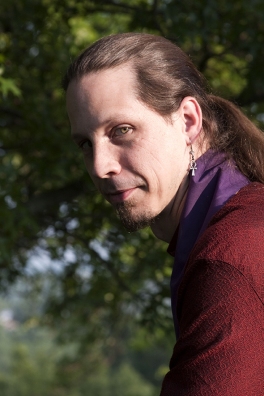 So, why another book on Psychic Protection? Hasn’t there been enough written on the subject? Yes, there has been a lot written about it over the years, but what sets Psychic Protection apart from the others is that it is practical and encompasses more than your usual protection techniques.

In addition to standard protection techniques such as specialized stones and herbs, you will find other more adaptable tools, and all of this information will be tempered with common sense. Beginning with the human body and the necessity of taking care of one’s self, Psychic Protection takes a comprehensive look at what you can do to protect yourself psychically speaking, and it is centered on sharing information that requires no particular tools. In addition to discussing the human body, a look at astral impressions, thoughtforms, and reading body language are included in this tome. The book itself is split into sections that correspond to the four classical elements of the Western Esoteric Tradition, and therefore time will be given to emotional and physical health as well as the more commonly known tools such as stones, oils, herbs, and certain rituals. For the novice or the experienced, this gives you what you need to protect yourself, even when you may not have your favorite tools on hand.

More details to follow for the December titles nearer to release dates.

Next NewsletterDecember 31st, 2012
This will be the biggest newsletter yet! With full access to all the news from the year! The highlights, the reviews, and a sneak peek at whats in store next year!!